A final farewell to 2020 Milky Way season? Plus a bonus sunrise

Decided to make use of an empty Sunday night and head down to the South Coast to get a milky way shot. Forecast was for clear skies, with fog in the morning.

So I decided on a double-header- MW in the evening (10pm ish), then down to Dorset to try to capture the elusive Corfe Castle mist shot.

Milky Way session went well, although the sky was quite hazy along the horizon. Got some tracked shots of the sky and some foreground shots for stacking. The results are a little muddy, but still look OK.

I headed on to Dorset, had a few hours sleep in the car, then climbed West Hill in thick fog (very hopeful!). There were about 10 people up there by the time dawn hit (06:45), but still no sign of the sun. Just a few meters visibility and it was cold and damp up there.

A guy had a drone and flew up just 40m above us, from where the view was epic! A lovely view across the valley, with just the tops of the distant hills popping out above the fog, the sun spilling orange light over the fog, which was rolling over and down the hills. No sign of the castle though.

Waited until about 9, and although the sun was breaking through, there was no sign of the low-lying fog clearing, so I headed home, via the New Forest. By now all the fog/mist had gone, so the morning shots were a bit of a bust.

I checked the Corfe Webcam on the way home and it seemed like the sun finally beat the fog at about 10:30. I could have stayed, but the shot wouldn't have been great as the sun was so high. Oh well- another day! 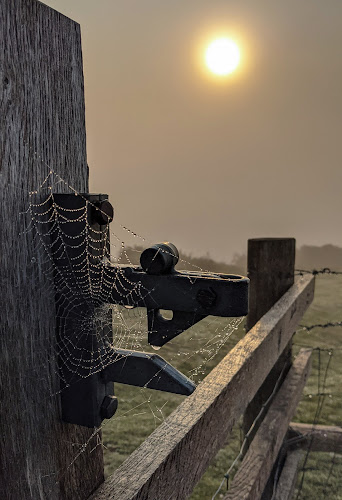